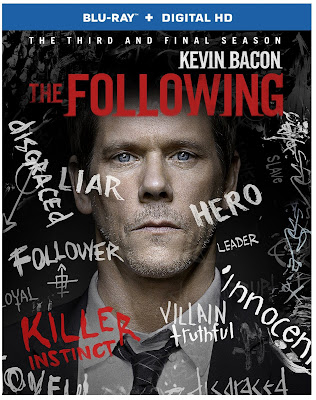 THE FOLLOWING: THE THIRD AND FINAL SEASON

Thanks to Warner Bros. Home Entertainment. I have ONE copy of the Blu-Ray/HD Digital Copy to giveaway to one lucky winner.

2)   Tweet us (see links above) the following statement. "I want to win The Following S3 BD"
Using the hashtag #FollowingBD  ** DO NOT COMMENT on this post.

4) Winner MUST live in the US only (SORRY) and multiple entries will NOT be accepted. One per person regardless of how you enter the contest. Contest Ends Nov 5, 2015

Thanks and GOOD LUCK! 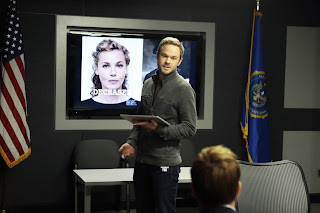 – Ryan Hardy returns to the FBI for the first time since the capture of Joe Carroll in The Following: The Third and Final Season from Warner Bros. Home Entertainment. The electrifying release of the final season of the thriller that captivated over 6.2 million viewers includes all 15 intense episodes plus exciting bonus content including four featurettes, The Following: Funny AND Die Parody, severed scenes, the 2014 New York Comic-Con® panel and a gag reel. The release will be available for the first time on Blu-RayTM and DVD on October 13, 2015 with SRPs of $39.98/$44.96.   The Following: The Complete Series is also available on Blu-ray™ and DVD on October 13, 2015, with SRPs of $99.97/$95.72.

A year has passed since the hit thriller’s season finale found rogue ex-FBI agent Ryan Hardy (Kevin Bacon) finally capturing his nemesis Joe Carroll (James Purefoy).  With Carroll locked up on Death Row and Hardy back with the FBI – and in a stable relationship with an ER doctor (Zuleikha Robinson) – new threats emerge that have Hardy, Mike Weston (Shawn Ashmore) and Hardy’s newly agented niece Max (Jessica Stroup) on edge and off balance.  Unlike the known threat of Joe Carroll, each new danger is potentially more lethal because the FBI isn’t exactly sure where it’s coming from.  But with psycho twin Mark Gray (Sam Underwood) still at large, Joe Carroll still haunting Ryan from behind bars, Carroll’s murderous mentor Dr. Arthur Strauss (Gregg Henry) in the background, and a new, meticulous chameleon-like killer (Michael Ealy) circling, Hardy soon realizes that Joe Carroll was only the beginning.. 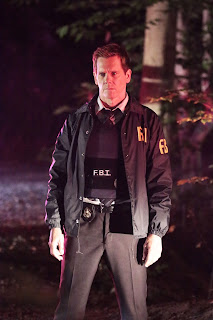 “We are thrilled to announce the release of The Following: The Third and Final Season and The Following: The Complete Series on Blu-Ray and DVD,” said Rosemary Markson, WBHE Senior Vice President, Television Marketing. “Season Three took fans on an extraordinary final ride – one filled with incredible plot twists, mesmerizing suspense, and endless drama. While we’re sad to see this show come to an end, we are excited to make the Third Season and the Complete Set available on Blu-ray and DVD, with loads of behind-the-scenes bonus content so the show’s loyal fans can re-watch their favorite episodes again and again.”

The Following: The Complete Series