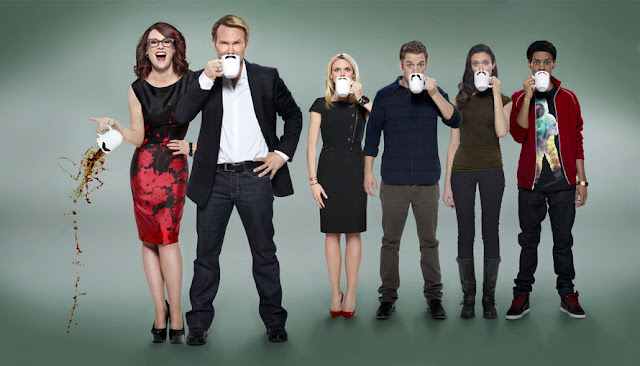 As I feel in love with a little show over on Fox called "Breaking In". Last week was the season 2 premiere. I have been waiting very long for this since it was announced that it was being brought back from the dead. I loved the first season and then when it was suddenly canceled I was BUMMED. So you know I should have loved the premiere and want to gush all about. Well, sadly not so much. It was all just sort of a let down for me.
It is pretty much a "reboot" which I was unhappy to hear about before hand. Why mess with perfection? Having adding two new people (Will&Grace's) Megan Mullally (Veronica) and Erin Richards (Molly). I was not expecting to miss Michael Rosenbaum (Dutch) as much as I did have after watching just one episode. Oh right, the absence of Trevor Moore (Josh) didn't even notice.
Having such a insane, hilarious first season. I truly enjoyed seeing how Oz (Christian Slater) was always up to some sort of crazy antics, pulling pranks and such on everyone. It was the a bummer to see them decide to gear the show more towards an "office comedy". Veronica is introduced as the new temp secretary. Eh, okay.
Enter stage left is Molly (Erin Richards) playing Veronica's assistant. Veronica is an odd ball, silly character. So far not a fan, maybe I will change my mind later. Nobody in the office really likes her very much. I did have a few giggles, as with the celebratory "cool" walk(after they landed a job) which was then quickly ruined. Cash (Alphonso McAuley) wanting to prank Veronica and getting away with it. A noticeable jab at Fox was very enjoyable. I didn't hate it, just was not up to standard as past episode. Change is good, but a girl can only put up with so much. Taking a show and turning it inside out. Towards the end Oz reveals that he is going broke, which leads him have to sell the company. In the end she does come to buy Contra, and is indeed taking over as the new "boss". Not sure it will stick, we will see for just how long.
If you not a fan of "Will&Grace" or never heard of it chances are your not going to like the brand of comedy Megan brings to the show. Not to say she's not funny. Just have to like that sort of humor. I have a tendency to not like change, but I refuse to give up on this show. It still has is own unique style just bringing along new people for the ride. I just wish the writers/producers (whomever) get Micheal back. Like yesterday. I'm sticking with it and will post my thoughts for future episodes here.
Check out Breaking In on FOX  every Tuesday night at 9:30 est/6:30pst!
Posted by Monique at 7:01 PM