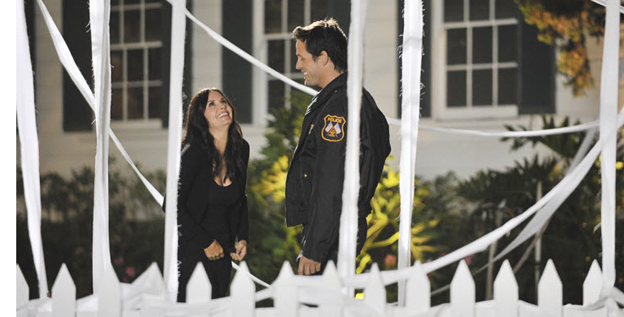 Just wanted to share my thoughts on last week's Season 3 premiere of ABC's "Cougar Town". It has been off the air for a very long 9 months. (Nice work ABC). I have been looking forward to it as many other fans alike. It was not the what I expected. Not to say this episode was not enjoyable. It was, I am just delighted have to finally the wine enthusiast back on my television screen every week.

It is completely cool to see how everyone has changed paths since last we have seen them.
Andy and Ellie baby seems to be a "handful", to say the least. Demon baby? Perhaps.

Meanwhile, everything is moving right along for Jules and Grayson. Happy couple alert! I like that we get to see them progress as a couple, first season I would not have guessed them getting together. Travis is off at college living with roommates, but can't seems to shake the family wanting in butt in his life. Ah, family even going away to college they don't want to cut the strings of parenthood.

I just love how the characters are evolving, changing or just simply being who they are.

Why such a long wait for the show. Well, the network's fall schedule put on the now canceled ('Work It"). The show about men in drag. Ugh, it was a wise choice, from what I heard about the short run it had (2 episodes).

Sadly, I was bummed to find out back in November that the network (for budget reasons) had to cut the shows episodes to just 15. Don't take this personal ABC but you really made a mistake (HUGE) not giving this show a fall premiere. Ah well, I still love watching the show. Even if they keep the title.