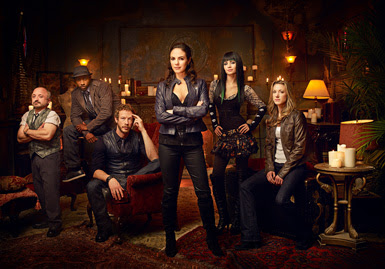 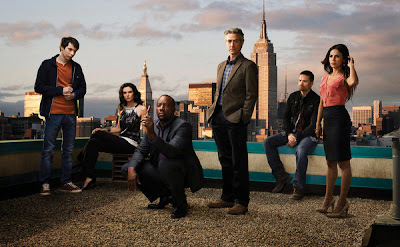 Season 4 of Warehouse 13, comprising 10 episodes, will premiere at 9PM (ET/PT). The season opens with the team confronting the horrible reality of the Warehouse’s destruction and the tragic loss of Steve Jinks (Aaron Ashmore), Mrs. Frederic (CCH Pounder) and H.G. Wells (Jaime Murray). With matters so desperate, Pete (Eddie McClintock), Myka (Joanne Kelly), Artie (Saul Rubinek) and Claudia (Allison Scagliotti) must decide whether to knowingly use a dangerous artifact for their own personal gain – at the risk of deadly consequences.

During season three, Warehouse 13 averaged 3.3 million total viewers and a series record 1.6 million Adults 18-49, based on Live +7 data. The most watched series in Syfy history, Warehouse 13 is produced for Syfy by Universal Cable Productions. Jack Kenny (The Book of Daniel) is executive producer and showrunner.

In season 2 of Syfy’s action-packed hit drama series Alphas – returning at 10PM (ET/PT) – a clandestine group of ordinary people with superhuman mental and physical abilities, led by preeminent neurologist and psychiatrist Dr. Lee Rosen (Emmy Award-winner and Academy Award-nominee David Strathairn), takes on cases the CIA, FBI and Pentagon are unwilling or unable to solve going head-to-head with many of the criminal Alphas hiding among the normal population.

The new season picks up eight months after last year’s stunning season finale with the stage set for an explosive turn of events at the Binghamton facility (the Guantanamo of the Alpha world) that could have devastating, far-reaching consequences.  Dr. Lee Rosen, having exposed the existence of Alphas to the unsuspecting public, finds himself discredited and imprisoned by a government desperate to cover up his stunning revelation. Some of the team have disbanded and without Dr. Rosen’s care and guidance, have regressed to their old, destructive ways. They must now battle their individual demons, reunite and try to save their own.