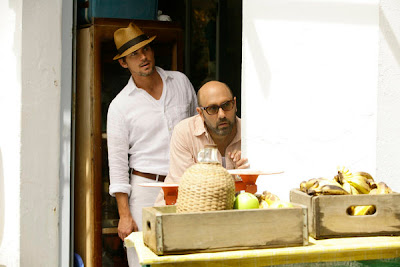 'White Collar' season premiere left you wanting more after such a great season 4 opener. (*Spoiler Alert*) If you have not watched the premiere yet, do not continue. Who would have thought that his safety was in jeopardy when his "right hand man" Henry Dobbs(Gregg Henry) turns him right over to Agent Collins (Mekhi Phifer). I would have not guessed that ending.


Well this week's episode 'Most Wanted' turns it up another notch. If you did not love this show already. Neal being held hostage is pretty hot (well a girl can dream). But it does take a turn leaving him injured.

Don't fret, Mozzie and Peter on the case of how to come to Neal's rescue. The clever way Neal makes a run for it, may make you feel bad for Agent Collins. Nope, I doubt it.

Peter wants to make a deal with his boss to reinstate Neal to his original deal. Peter, Mozzie and Neal have to form a very risky plan to take down Dobbs. It is rare when Peter is called on to have a "undercover" role to play, can be awkward but fun to watch.

The shows writers are brilliant in how they can always build on the excitement from one episode to the next. It just hooks you into these characters and won't let go. You can never be to sure to how the storyline will suddenly change and keep you guessing.

Neal gives Mia a pretty sweet parting gift to remember him by. Mozzie is not done living on this fanasty island. Peter gets a change he did NOT see coming. Agent Collins gets taken for a loop. I just love these twist ending yet again. Don't you. Tune in to see why this show just keeps getting better.


'White Collar' airs Tuesday Nights at 9e/8c only on USA Network.
Posted by Monique at 7:58 PM