CONTEST ENDED!!!!
ENTER TO WIN!! "The Complete 4th Season of "The Mentalist"

Red John is dead. Or is he?Following last season’s shocking finale, Patrick Jane returns for season four of The Mentalist, which will be released on DVD September 18, 2012 from Warner Home Video. Averaging nearly 15 million weekly viewers and returning for a fifth season on CBS this fall in its new Sunday 10/9c time period, The Mentalist continues to be a solid hit among fans.

In the fourth season, Patrick learns the true price of revenge and deals with the fallout from his actions of the previous season. The rest of the CBI team – Agents Teresa Lisbon, Kimball Cho, Wayne Rigsby and Grace Van Pelt – find themselves involved in circumstances, both personal and professional, with equally serious consequences. With a new boss and new perplexing cases, the unconventional Patrick Jane continues to use his razor-sharp skills of observation and psychological manipulation to bypass the system and solve the toughest crimes – in his own inimitable way.

The Mentalist was created by Bruno Heller (HBO’s Rome), who executive produces along with Chris Long (Criminal Minds), Tom Szentgyorgyi (Lie to Me), Ashley Gable (Crossing Jordan) and Daniel Cerone (Dexter). The series is produced by Warner Bros. Television. 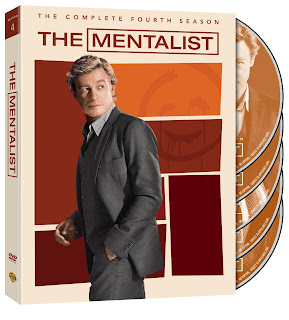 SPECIAL FEATURES
California Bureau of Investigation (CBI): Behind the Badge
The strength of The Mentalist is reflected in the pains taken by the producers, cast and crew to create the “appearance of reality” when it comes to the police procedures  involving the California Bureau of Investigation (CBI).  Find out how the actors and writers engage law enforcement consultants to teach them how to make each episode as engaging and realistic as possible.

Must live in the US please. Must be 18 yrs or older to enter. Please only ONE entry per person/per twitter account. The winner will be picked at random and announced on Twitter!
Deadline to enter is Monday October 1st, 2012. Midnight EST.