'The Kings Of Summer' Movie Review 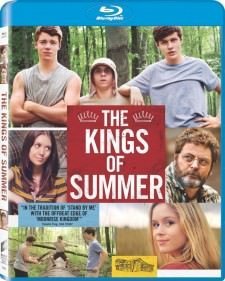 Plot: Three teenage friends Joe (Robinson), Patrick (Basso) and the eccentric and unpredictable Biaggio (Arias) sick of being told what to do by their parents, they decide to build a house in the woods for the summer. The friendship between the boys is tested. The boys learn a lesson about family, weather or not you're born into it or create it is something you can not run away from.

I remember what it was like when you got sick of following your parents rules. You could only wish and hope to grow up even faster. I just want to be able to do what I want when ever I want. You just can't wait to move out and have my own place.

Well in The Kings Of Summer you get to see what the highs and lows of what it was like to be a teenager again. This movie is very much a coming-of-age film. It follows the story of Joe (Nick Robinson) having a troubled time connecting with his dad Frank (Nick Offerman). Just recently after losing his wife, Joe is upset at the fact that his father has recently started dating.

Meanwhile, Joe's friend Patrick (Gabriel Basso) is having to deal with his over bearing parents (Megan Mullally and Marc Even Jackson). They keep treating him like a child and smothering him.

The boys set out to find what is the be their home in the middle of the woods. Bringing along for the ride the odd, but very funny Biaggio (Moises Arias). The boys set up shop and must find a way to eat, live and survive in the woods. I must say I really didn't expect to enjoy the movie. It was very light-hearted, funny movie that has heart as well. Dealing with loss, first loves, having you heartbroken for the first time. You will feel for the characters. I had a few laughs as well thanks, giving the offbeat performance of Mosises Arias.

Overall, I found the movie to be very touching, refreshing and honest. I enjoyed watching it, it was a bit slow at points here and there. It was just a "feel good" movie. I thoroughly enjoyed watching, I would highly recommend watching.