'Bones' Coming To An End? 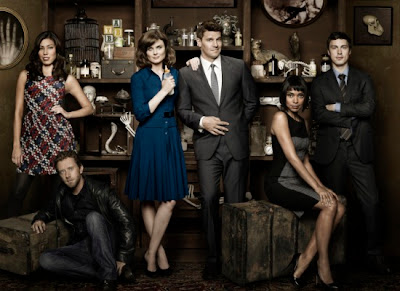 'Bones"creator Hart Hanson has been MIA from twitter since the series final in May, but he was alerted by

"400 e-mails" of tweets that David Boreanaz hint of the hit FOX show coming to an end.

"David Boreanaz ‏@David_Boreanaz
You must always keep your options open and ready for New challenges. The fear is the unknown and that's exciting."

"David Boreanaz ‏@David_Boreanaz
SDCC 2012 shld be a blast and quite possibly the last for #Bones ? Farewell tour? Look forward to seeing everyone there."

Boreanaz also stating he'll be a "free agent" after next season (Season 8). Read the full article on EW

As a fan of the series. I am did have(a mild panic attack) but then should have realized to read these tweets with a bit of caution.

What do you think? Think the show should continue, or have you lost interest?