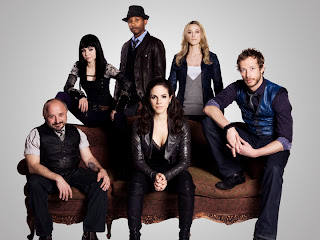 Good news for fans of the hit Canada series "Lost Girl"(now on US soil on Syfy Channel) the show will be heading to DVD/Blu Ray soon.

FUNimation Entertainment to release LOST GIRL on DVD & Blu-ray
SyFy Channel’s Hit Series available this Fall
Flower Mound, TX – June 18, 2012 - FUNimation Entertainment announced today that it has acquired the Blu-ray & DVD, DTO/DTR/EST, (and via digital carriers) PPV and VOD rights to the hit series, Lost Girl as seen on cable’s SyFy Channel and Showcase in Canada.
Series synopsis:
Lost Girl follows supernatural seductress Bo (Anna Silk: Being Erica; Billable Hours), a Succubus (a powerful female entity in folklore) who feeds off sexual energy. Raised by human parents, Bo had no reason to believe she was anything other than the girl next door - until she "drained" her first boyfriend to death.
Bo discovers she is one of the Fae, creatures of legend who pass as humans while secretly feeding off them. Faced with choosing between an allegiance to the Dark or
Light Fae clans, Bo takes the middle path between the human and Fae worlds while embarking on a mission to unlock the secrets of her origin.
Bo’s succubus nature tangles her in a sexy love-triangle with Dyson (Kris Holden-Reid: Ben Hur, The Bridge; The Tudors), a shape shifting Fae and homicide detective, and Lauren (Zoie Palmer: The Guard; Instant Star), a human doctor who has found a way through science to help give Bo the sexual self-control she’s been aching for.
Navigating this complicated life with Bo is her human confidante and street-smart survivor, Kenzi (Ksenia Solo: Black Swan; Life Unexpected).
Lost Girl was developed by Prodigy Pictures, in association with Shaw Media and Showcase. Executive producers are Jay Firestone, Emily Andras, Plato Fountidakis, and Paul Rapovski. James Thorpe is co-executive producer, Vanessa Piazza is co-producer and Wanda Chaffey is producer.
Season One will be released on October 23, 2012 with Season Two following on November 13, 2012.
More information can be found at : www.takelostgirlhome.com
Posted by Monique at 2:15 PM