Want to win? Keep reading to find out how, all the details are below. 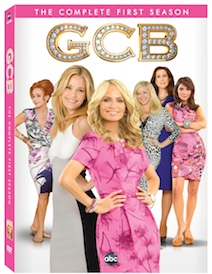 Back in high school original mean girl Amanda Vaughn (Leslie Bibb) mercilessly tormented her less attractive classmates. Twenty years later,after her hubby is busted for a Ponzi scheme and meets his maker in a particularly scandalous way-- a disgraced Amanda is back in Dallas to start life anew under her mother's (Annie Potts) palatial roof.

But will the good women of her hometown welcome her with open arms or dole out some kick-ass karmic payback? Let’s just say, hell hath no fury like the cosmetically enhanced!

Bonus Features:
Bigger in Texas:
Fans can watch the transformations the actresses go through from hair to makeup, and more.
Costume designer Robert Blackman describes each of the GCB’s Dallas style with a show-and-tell that
highlights each character’s unique look.

Living Large
Stars Annie Potts and Jennifer Aspen, along with production designer Denny Dugally, take viewers along for an exclusive tour of the world of GCB, showcasing how the Texas spirit is vividly brought to the screen each week with detailed authenticity.

Preaching to the Choir – Fans will enjoy a visit to the set and a conversation with Kristin Chenoweth, Miriam Shore and the rest of the cast as they sing and share insight as to why music is so important to the series.

GCB: Most Likely To…
This piece offers fans the opportunity to get to know the cast in this irreverent collection of thoughts from the team behind the show. From “Best Dressed,” to “Class Clown,” fans will see what the cast really thinks of one another.

Send an e-mail to PopJunkieny@aol.com.

Please include your FULL name and Date of birth in the email. Put in the Subject "GCB Contest"
Contest is only opened to US RESIDENTS ONLY. Must be 16 yr and older to enter. Entries must be received by 11:59pm est on Wednesday June 20.

ONE winners will be selected at random.  Only ONE e-mail per person/ mailing address. Multiple entries will not be accepted.