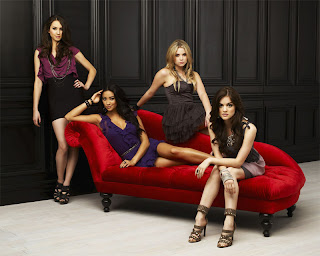 Burbank, CA (August 21, 2012) – Fans of the hit ABC Family series “Pretty Little Liars” won’t have to wait until October for the next fix of Rosewood when ABCFamily.com launches its weekly webseries “Pretty Dirty Secrets” starting Tuesday, Aug. 28th during the summer finale of “Pretty Little Liars.” There will be eight different episodes airing every Tuesday on ABCFamily.com beginning at 5 PM PT/8 PM ET.

The webseries will focus on the time between the Aug. 28th summer finale and the special Halloween episode of “Pretty Little Liars” airing in October, when the town of Rosewood is getting ready for Halloween. The local Halloween store in Rosewood is a busy place these days and a good spot for someone who wants to keep tabs on certain people. But as the usual suspects come in and out of the store, will they find more than just the ultimate Halloween costume?

"Pretty Dirty Secrets" will also introduce a new face in Rosewood, Shana (Aerial Miranda), who is the Halloween store clerk. The character of Shana will later be seen in the "Pretty Little Liars" series airing in early 2013.

Part of the Disney/ABC Television Group, ABC Family is distributed in over 97 million homes. ABC Family features programming reflecting today’s families, entertaining and connecting with adults through relatable programming about today’s relationships – told with a mix of diversity, passion, humor and heart. ABC Family’s programming is a combination of network defining original series and original movies, quality acquired series and blockbuster theatricals. Emmy® Award-winning ABCFamily.com provides a variety of interactive entertainment and community features, from rich, fan-centric programming – including blogs, viewing parties, webisodes, full episodes of the network’s hit programming, along with sneak peek exclusive previews and behind-the-scenes clips. ABC Family is also the destination for annual Holiday events with “13 Nights of Halloween” and “25 Days of Christmas.” ABC Family. A New Kind of Family.
Posted by Monique at 5:46 PM