'The Campaign' Worth A Good Laugh 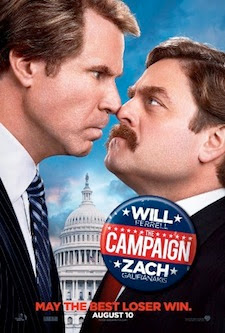 "The Campaign" is what you expect from the two leading men Will Ferrell (Cam Brady) and Zach Galifianakis (Marty Huggins). Giving the state of politics to today this movie is very much a welcome laugh, that is needed. As if real life can be any more worse than this satire political raunchy comedy. It's director Jay Roach (Austin Powers films, Dinner for Schmuchs) does find a good balance between funny and down right hilarious moments.

Cam Brady (Ferrell) has been running unopposed for years for his seat in the senate in a small town in North Carolina, but his run may come to an abrupt end. Due to him suddenly having a challenger wanting to give him a run for office by an highly unlikely candidate Marty Huggins (Galifianakis). Playing the filty rich CEO's Motch Brothers (John Lithgow and Dan Aykroyd) using their money to influence the town for their benefit (giving me flashbacks of Trading Places). Having an image consultant Tim Wattley (Dylan McDermott) swoop in to help out with Marty's image. Let the mud slinging commence.

Will Ferrell does his best giving the audience a bit of a President Bush that takes you back to his time on 'Saturday Night Live'. Early on, we see why Cam (Ferrell) is such a screw up. Calling up your mistress and leaving a dirty message but you reached the wrong person. The main characters are paired greatly in this political comedy. Cam is that guy that will do anything and everything to take down Marty. Cam starts out as though he means well, only to stab you in the back. Doing vile and low down things can be very funny.

Cam seducing Marty's wife for his own sick pleasure. Filming it for all the world to see, and making it a campaign ad. Yes, he does take it that far. Anything to win the senate seat. Cam is ready and willing to go there. Getting drunk and stealing a cop car. Marty and Cam engage in some down and dirty tactics to take each other down, in hopes of winning voters. 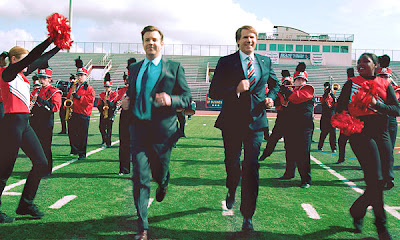 Zack Galifianakis is perfect playing the "fish out of water" and somewhat feminine character. Don't get me wrong though, Will is a funny guy. I just found myself enjoying Zack's performance a whole lot more. Marty is an unknown, shy family man. Running a tour bus in a small North Carolina town. Marty's dad Raymond Huggins (Brian Cox) is very much MIA in his son's life. He just wants him to follow his strong family lineage. Having an all or nothing attitude, it is clear they don't have a loving relationship.

Not forgetting to mention the scene stealing rants of Dylan McDermott (Tim Wattley) he goes way overboard to "help" Marty to try and win against Cam. Tim really plays the role of a hard ass campaign manager hired by the Motch Brothers. Comes in to clean house in order to have Marty Huggins become a winner going up against Cam.

Yes, it is the type of comedy that tends to take "safe" best bet of using low ball humor. Unfortunately, some of the jokes work, while the other ones tend to fall flat. Some of the jokes geared towards Marty's family/wife (Sarah Baker) being overweight was pretty low brow/typical humor.


Also, I feel as though Jason Sudeikis was not given much screen time, which deeply saddens me.

Overall, I feel as though Will and Zack are two of the funniest men in Hollywood today. The movie is not overly long at about 85 minutes long which is perfect. I would have an issue with a movie that drags out too long. Pretty good flim, just not worth the full price of admission, matinee worthy at best. I give "The Campaign" 3 1/2 laughs out of 5.