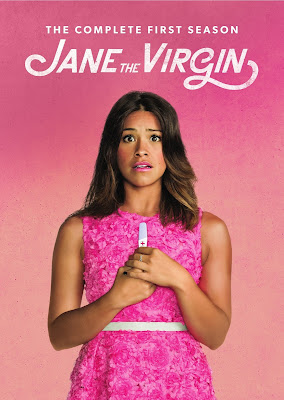 Thanks to the folks over at Warner Bros. Home Entertainment. I have a cop to giveaway to ONE lucky winner!


Contest ends 10/5/15 at 11:59pm ET. US Only PLEASE. ONE entry per person, regardless of how you enter the contest. Multiple entries will NOT be accepted!

The DVD Includes All 22 One-Hour Episodes From The First Season, Plus Never-
Before-Seen Featurettes, And Much More!


Just in time for the season two premiere on The CW!

Set in Miami, Jane The Virgin follows the surprising and unforeseen events that take
place in the life of Jane Villanueva. Jane (Rodriguez) is a 23 year old hard-working,
religious Latina woman, whose family tradition and vow to save her virginity until
marriage to a long time boyfriend and detective, is shattered when her doctor
mistakenly artificially inseminates her during a checkup. And to make matters worse,
the biological donor is a married man, a former playboy, and cancer survivor who is not
only the new owner of the hotel where Jane works, but was also her former teenage
crush.

DVD BONUS FEATURES
• Jane the Virgin: Immaculate Creation
Go behind the scenes and get a peek into the creation of the show.
• Getting to Know the Cast of Jane the Virgin
How well do the cast know each other? We’ll find out with this fun featurette as the co-stars get an opportunity to ask each other questions and guess each other’s answers.
• Gag Reel
• Deleted Scenes