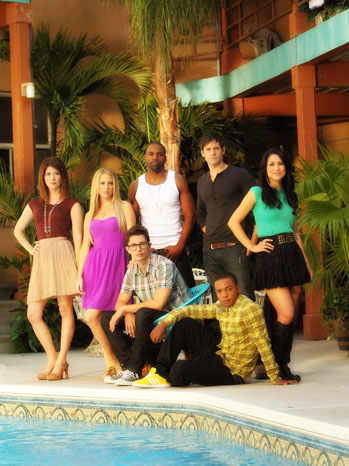 It is rare that a show comes around that can grab your attention for just seeing the pilot. Well, it looks like the CW has hooked (me) on the juicy new drama "The L.A. Complex". The show is just coming to the US (via Canada). It is well on it's way to having a second season on Much Music. If all goes well the CW will pick up the series beyond the current 6 episode run.

The show takes a real look at the struggles and what it takes to make your dreams come true. The show is focusing in on a group of young 20'somethings trying to make in big while living in the city of dreams. Yes, Los Angeles. They all live in a bit of a rundown apartment complex. It has a pool, which is a plus. I know what you thinking. Reminds you of "Melrose Place".This show however, is are a bit different. Things are pretty racy and  crazy from the start. Not to ruin the show completely for giving too many spoilers. Here are my thoughts on the premiere episode.

The main cast features Cassie Steele (Abby) you may know her from a little show called "Degrassi". She is a complete mess. Trying to get her big break as an actress, being broke and jobless. Abby does have a boyfriend back home in Canada. Doubt this relationship will last. Why, well having a  has a one night stand may have something to do with it. Enters hottie next door (formerly a resident of the complex) Jonathan Patrick Moore (Connor) he just hit the big time landing his first lead TV role.  Benjamin Watson (Tariq) wants to make his name known as a producer in the music business. Having a really hard time as he is an errand boy for the past nine months. Jewel Staite (Raquel) is the vet of the group. She is an actress that has a canceled show under her belt.. She thinks that he can have her pick of prime leading roles. She has a hard time with rejection. She will step on the "little people" to get ahead. I can already tell.

Oh the other end of the spectrum is Joe Dinicol (Nick), he is the awkward, nerdy and boy next door type. He is crushing hard on Abby, alas is too shy to say it. Nick want to make to make people laugh for a living, while he slings hot coffee during his day job. Tying to make the rounds in the comedy circuit. Yikes, he bombs. Last but certainly not least, Chelan Simmons (Alicia), is the naughty girl of the bunch. She is out to make her name known. She is a dancer, trying to make it happen for herself.So how does she make money, well that is easy to answer. Workin' the pole. What else is a pretty girl to do. Duh.

What works for me watching this show is that it brings to light what is it really like to struggle. Lots of people having the same career goals. Life is not always going to far. It does not "candy coat" how hard is it to make in the real world. A couple of the 'OMG' moments are there, of course. I am sure there will be plenty more to come. I have read/heard nothing but great things to come of future episodes. So I am fully ready to take on whatever happens next. Looking forward to more scandalous goodness. Will you be tuning in?