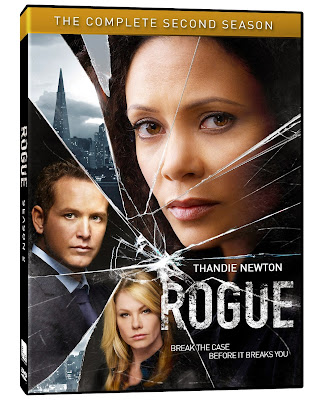 Thanks to the folks at E One Entertainment for the awesome contest.

So how do you enter for you chance to win? Keep reading....

Undercover detective Grace Travis (Thandie Newton) crossed the line between right and wrong and her involvement with the city’s most powerful and dangerous crime family caused her to pay the ultimate price – the loss of her son.

This season, she’s left undercover life behind to be a better mother to her daughter.  She also has a new job as a handler for an FBI task force investigating corporate espionage in San Francisco.  Recently separated, with the arrival of her estranged mother, she has plenty of drama on the job – and at home.  But when her undercover operative goes missing, Grace is forced back into a world of lies and deceit, following a trail of dirty money and investigating  four soldiers at the center of the drama.

** Don't forget to use the HASHTAG ~>RogueDVD

** Contest End Date 6/5/15 11:59pm ET. ONE entry person person. Duplicates will NOT be accepted. Must enter using FACEBOOK or TWITTER. Only ONE entry allowed whether it is Facebook or Twitter. Thank you.
GOOD LUCK!