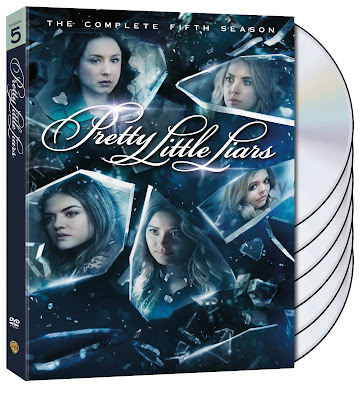 How To Win "Pretty Little Liars: The Complete Fifth Season.

2)Just tell me your favorite episode and/or character and why?

RULES: ONE entry per person no matter how you choose to enter the contest. Open only to the US. Duplicate entries will not be accepted. Winner will be picked at random. Contest ends 6/23 at 11:59pm est.

PRETTY LITTLE LIARS: THE COMPLETE FIFTH SEASON
Includes All 25 One-Hour Episodes, Plus Exclusive Featurettes, Deleted Scenes, And the Fan Appreciation Episode “We Love You To DeAth”

Season five of Pretty Little Liars begins in the moments following the epic season four finale, in which Ezra was shot, among other shocking acts and revelations. Alison is alive and back in Rosewood, and everyone is affected by her return — but is she the same Alison after being on the run? Hanna‘s ex, Caleb, returns, but he, too, is changed. Plus, how does Mona fit into everything and what is Melissa (guest star Torrey DeVitto) hiding? With more questions than ever and other familiar faces back in Rosewood, there are now five pretty little liars trying to piece together who has been tormenting them. It‘s sure to be another season of emotion, intrigue and nail-biting suspense, with many must-see moments, including the series‘ landmark 100th episode.