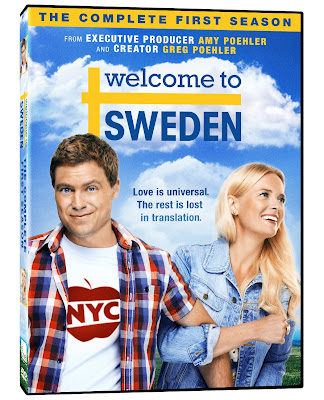 Thanks to E One Entertainment. I have a giveaway for you NBC's "Welcome To Sweden:The Complete First Season" coming out on DVD May 19, 2015.

3)Just tweet me your favorite character and why. That's it!
** Don't forget to use the HASHTAG ~> #WTSDVD

I will pick (3) Three winners at random. I will contact you via Facebook and/or Twitter. Each winner receive a copy of 'Welcome To Sweden': The Complete First Season on DVD.

Please Only ONE entry per person. Multiple entries will not be accepted. You can only enter either on my FACEBOOK Page or TWITTER.  Only ONE entry allowed whether it is Facebook or Twitter. Thank you.

“As the title suggests, the wit and heart of the show are available to all.  A-”
-- Entertainment Weekly

Based on Greg Poelher’s True Life Story, the Hilarious, Top-Rated Rom-Com Arrives May 19 in a 2-Disc DVD Set Containing All 10 Season One Episodes;  Guest Stars Include Amy Poehler, Will Ferrell, Aubrey Plaza
and Gene Simmons

New York, NY/Toronto, Canada (April 7, 2015) – Americans best know Sweden for exports such as meatballs, Ikea furniture and Volvo.  But on May 19, Entertainment One (eOne) adds “sitcoms” to the list with its co-produced series WELCOME TO SWEDEN: THE COMPLETE FIRST SEASON, a 2-disc DVD set.  The acclaimed NBC sitcom, an offbeat single-camera comedy from executive producers and siblings Greg & Amy Poehler (“Parks and Recreation”) and created by and starring Greg, became one of the highest-rated summer broadcast comedies of the past five years when it debuted last July.  And before its second season debuts, experience a strange land and its stranger customs, in this fish-out-of-water sitcom called “the best new NBC comedy in a long time"

Based on Greg Poehler’s true life story, WELCOME TO SWEDEN, follows a successful New York money manager to the stars,  Bruce (Greg Poehler) who falls in love with a Swedish girl, Emma (Josephine Bornebusch, top-rated Swedish drama “Solsidan”), and follows her back to her native Stockholm when she returns for a job.  Moving halfway around the world with a new love is a huge step and Bruce, with no job, friends or real clue about what he is getting himself into, is quick to face the many unique challenges and culture clashes that living in a foreign land presents -- most notably, how to win over Emma’s strange and very Swedish family.  From Bruce’s comical struggles to learn the language to his exploits behind the wheel of a Swedish car, run-ins at the immigration office and with his celebrity clientele, WELCOME TO SWEDEN reveals itself to be “romantically old-fashioned… and delightfully weird".

Making his acting debut, Greg stars in the series along with  Bornebusch, and Lena Olin (Chocolat, The Ninth Gate) as Emma's therapist mother Viveka, retired sea captain father, Birger (Claes Månsson), and Illeana Douglas (Easy to Assemble, Grace of My Heart) and Patrick Duffy (“Dallas”) as Bruce's parents.  They’re joined in the inaugural season by guest stars Amy Poehler, Aubrey Plaza, Will Ferrell and Gene Simmons, who make guest appearances as themselves in this series predominately shot on location in Stockholm.

WELCOME TO SWEDEN is created by Greg Poehler. It is a co-production of eOne, TV4, FLX and Syskon and executive producers include Amy Poehler and Greg Poehler; Fredrik Arefalk for TV4; Carrie Stein eOne; and veteran Swedish TV helmer /creator Felix Herngren (Solsidan) for FLX.

About Entertainment One
Entertainment One Ltd. (LSE:ETO) is a leading international entertainment company that specializes in the acquisition, production and distribution of film and television content.  The company’s comprehensive network extends around the globe including Canada, the U.S., the UK, Ireland, Spain, Benelux, France, Germany, Scandinavia, Australia, New Zealand, South Africa and South Korea.  Through established Film and Television divisions, the company provides extensive expertise in film distribution, television and music production, family programming, merchandising and licensing, and digital content. Its current rights library is exploited across all media formats and includes more than 40,000 film and television titles, 4,500 hours of television programming and 45,000 music tracks.