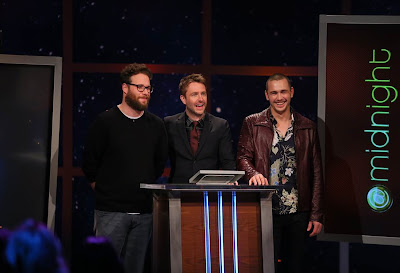 Funny man and 'Talking Dead' host Chris Hardwick over at AMC will be sticking around Comedy Central awhile. @midnight will be back for a third season for a 40 week run throughout 2016.

“Creating a new franchise in late night is no small feat, and we couldn’t be more proud of Chris and the entire team for what they’ve accomplished,” said Alterman.

“Comedy Central has been an amazing and supportive partner for ‘@midnight’ and I cannot thank them enough,” added Hardwick. “Making inappropriate jokes about Internet culture with my comedian friends is something I would do for the rest of my life if they’d let me. And this pick-up gives us the runway to tackle next year’s election, which I’m guessing will yield no shortage of social media gems.”
Posted by Monique at 5:33 PM