Best Friends Forever:'Single And Lovin' It' 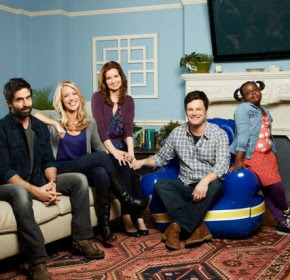 Even though NBC pulled the plug on "Best Friends Forever" the fans of the comedy series have been taking to the internet in protest. I had to review the (what was originally the last aired episode). The remaining final to episodes will air on Friday June 1st, 2012.

This episode Jessica finally let's it be know that she is back in dating mode. Lennon want to have some alone time with Joe which is not easy to have with Jess around.

Jessica sees Joe at the computer when she notices a picture of her ex-boyfriend frolicking in the sand with a new woman. She is having a fit, calls Lennon in the room. She then decides that she is going to change her Facebook status to "Single and Loving it."

Can we get our freak on? Not really.
Jessica keeps interrupting Joe and Lennon from having some "alone" time with each other.
Jess gets a message from a former crush (Keith) that really like her new profile status and picture.

Joe and Rav are chatting it up while eating at a coffee shop, the waitress recognizes Rav. The two went on a date before, but Rav never called her. Using the lame excuse "I lost my cell phone." She is livid, pouring coffee on the two. Banning them from ever coming back.

Later, Keith calls asking Jessica out on a date. What is a girl to wear? Queenetta chimes in, of course. Well, sort of. She is giving us her usual sass remarks. Love it.

On a date, who has a three-way phone call for support. Seriously. Jessica and Keith are having a good time on their date. Unfortunately, the the date goes south. Why? Keith is already spoken for as in married. Yes, but the twist is he has no problem with enjoying his date, as long as he is home on time.

Lennon and Joe are trying to get it on. Heading to the kitchen, getting the make out session on. Clothes are coming off. Only to have Jessica walk in on them. AGAIN.

The next day, Rav and Joe send Queenetta in the coffee shop for their beloved gyro. She fails, but yet still gets paid for doing the job. "I paid for my time, not results."

Later, at Rav's bar Jessica get hit on by a younger guy Cory. She is really unsure of just how young he is.  Cory shows interest, asking Jessica to a party in New Jersey at an estate. Sounds fancy huh? She happily accepts his invite.

A bit later, Jessica calls Lennon to check in. She is enjoying herself. Joe is listening in to the conversation. Joe reveals to her that she is at a "Cougar Ball". Lennon and Joe rush to Jessica's rescue. Truthfully though Jessica wants to "get weird."

Jessica is nominated for "Queen Cougar". She is not happy, confronting Cory about why he would bring her to this type of party. She then has a change of heart, deciding to embrace her inner cougar.

The funniest laugh out loud moments is when Lennon arrives to save Jessica from the madness. Rav want to find "the guy" he punches out the wrong one though. Not Cory.

Alas, Jessica is too young to win the title of "Queen Cougar" pretty sweet to even be nominated. Lennon promised Jessica to get her body "rocked" it's been a long dry spell for her and Joe.

Pretty solid episode, I enjoyed it. Doubt it will see life on another network, even though it would be a perfect companion to "Cougar Town" on TBS. I will be recapping the last two episodes anyway. Stay tuned.


Favorite lines:
"She almost sat on my junk."
"You may need spanks on top of spanks."
"You know your parents are paying for you to dress like a penis."
Posted by Monique at 6:45 PM