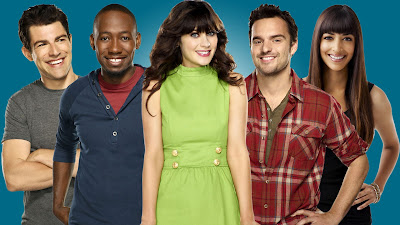 This week's 'New Girl is back to what made me like the show in the first place. Winston is rocking a new look. Jess hooks up a past flame. Schmidt takes a big leap towards being a "one woman man." Nick makes a tough decision.

Still taking the breakup with Russell very hard, having a song ("The River") on a loop. Everyone is feed up with the song. Nick and Caroline try to lighten the mood by dancing for Jess. Sending her right to the bar with CeCe.

Schmidt takes the phone away from Jess, she is the perfect example of a backslider. Winston wonders if he should get the DVD out to show Nick what happened the last time he and Caroline broke up before.

CeCe shows up at the bar, dress to unimpressed. Schmidt asked her too, to keep him for getting "too excited." Jess accuses Nick of being a backslider, he flat out denies it. Jess easily gets her phone back, to call up an old lover. The next morning, she wakes up next to Paul her ex-boyfriend.

Winston gets home, he got wasted hanging out with Joe he has his ear pierced, Seriously, not a wise choose. I think a tattoo would have looked cooler. Well, anything but this.

(Flashback) Paul is the world's ugliest crier ever. EVER. It is just too funny.

CeCe takes Schmidt to go visit her grandmother in the nursing home. Schmidt is not a fan of old people. They remind him for walking raisins. Caroline takes Nick on a search for an apartment, he is caught off guard when he asks him to move in with her.

At work, Paul makes a confession to Jess. What? He has a girlfriend her name is Jen. Yikes. Jess has the worse luck. Paul had just had a fight with her the night before, which is why he slept with Jess.
Jess goes to the guys for advice on what to do. They advise her not to say anything. We know Jess, she is going to cave and fess up.


A change for the guys is on the horizon. CeCe overhears Schmidt asking her grandmother how he can have a long lasting relationship. Could it be, Schmidt is really ready to put his "player" days behind him. CeCe is so touched by this. It it too much for Schmidt to handle he becomes painfully excited, so much that he passes out.

Winston finally has to break down and get the DVD out to show to Nick why he is making a huge mistake with Caroline.

At work, Jess goes to Paul begging him to tell his girlfriend that he cheated on her. Jess quickly realizes that Jen is very much like her. They are perfect together. Why ruin it, but before that could happen. Paul blabs out that he had indeed slept with Jess. Jen is crying, and goes to walk out. Jess stops he though, saving the day she gets the couple to make up. Paul then goes to pop the question to Jen (with some help from Jess).

I give huge credit for laughs this time to Winston. The three, yes three earring choices were hilarious. I like the way the show is heading as far as with the relationship storylines are concerned. It will be a roller coaster ride to see how Schmidt and CeCe develop to a serious couple. Very cool shoutout to "Happy Endings" in the ending credits.

In the end, Jess gets to talk to Nick about how she feels about the whole Caroline situation. Too little, too late. They already signed the lease this morning, Nick is moving out.

Favorite lines:
"Captain Black sparrow"
"Take it easy, black George Micheal"
"I will let myself die and then I will haunt you."