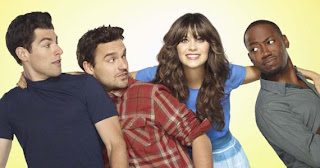 'New Girl' was right on the mark for me me. It had been lacking the funny Schmidt moments I am particularly fond of.

Nick is still bummed out about his most recent breakup, seeing that everyone around him is happy. Wanting to now put his focus only on growing tomatoes. He calls everyone up to the rooftop to make this announcement. I think he has serious emotional problems, sad yet I could not stop laughing.

Schmidt is about to have the rug pulled from under him. He goes by to see CeCe, but only to find out she is not happy and wants to end things. CeCe's Russian roommate hits on Schmidt. Boom. They are going out on a date. CeCe claims to be "cool with it".

Jess has a awkward meeting of her own. At the gym, she meets Russell's ex-wife Ouli. Feeling very awkward in seeing her in the buff (in the steam room). Of course, she freaks out and winds up inviting her to dinner. Yikes. No way will this NOT be weird. Jess can totally deal, being a product of divorced parents. Right? Um, wrong. Love the flashback they pop in, Jess as a young girl trying to get her parents to stop arguing. Nick begs her not to repeat it at dinner. Nick vows to hide Jess's tap shoes.

At dinner, wish by no surprise is very uncomfortable for all of them. Russell is clearly annoyed by Ouli. You can cut the tenson with a knife. Jess is getting to her breaking point, what is there to do. Breaking the promise she made. No shock here, she again breaks out in song to try and lighten the mood. Fail.

Schmidt has his moment to try and show off to CeCe. Two words. Okay, three. Tight bike shorts.

CeCe and Jess chatting about the weird Russian chick (Nadia). Is CeCe truly okay with it. Nope, confession time. She is totally crushing on Schmidt. Nice, I figured this was bound to happen. Obviously.

Nick has clearly has had some sort of semi-mid life mental breakdown and/or mid-life crisis. Seriously, who shouts at birds? He is very angry about his unhappiness, while everyone around him is happy.

Nadia and Schmidt have the oddest dinner conversation I've ever heard. Schmidt wants to know her favorite things about America. The conversation is weirdly amusing.

The next day, at the gym Jess talks about how much of a passionate lover Russell is with Ouli. Um, why and how would Jess know.

Jess is trying to find out what makes Russell tick, which only makes him upset. Jess is looking for that "fire" or "fire" that he has toward his ex-wife. Nope, not going to find it in Russell. Sigh.

Schmidt's date with Nadia, did not end very well. Tragic but still funny. CeCe comes home to find out that he is in the hospital.

Jess and Russell both agree they want different things, and end it. Surprised it lasted this long? Same here.
In the hospital, CeCe...(brace yourself) gets the news that Schmidt had gotten it "on" with Nadia. Wait for it..... he broke his "twig and berries"a.k.a. his penis. HI-LAR-IOUS.

Later, at home Jess discovers that Nick is back to hooking up (dating) Caroline. She is livid. Nick and Jess have a silly, yet heated argument over his "bad life" choices. Seriously, too funny. These two are so over the top. Schmidt has to keep his "excitement" under control for 8 weeks. Good luck bro.


Favorite lines:
"I want you to git"
"Are you Mick Mouse"
"Sandwiches and sex, I want that"
"She was kicked out of Russia CeCe, Russia"
"What are we at santa's family reunion, cause the clauses are coming out"


Kudos, as this episode was back to it's usual funny, silliness and weirdness. Tonight's episode 'Backslide" is not to be missed. It's very funny. Don't miss it tonight at 9e/8c on FOX.